For those of you who don't already know, Vitamix is one of the biggest names in smoothie makers and blenders.

They are known for their high power and efficiency, producing the smoothest smoothies ever, professional level durability and quality, and, unfortunately, usually a price to match.

However, the Vitamix E320 Explorian Blender is quite competitively priced for a Vitamix blender, which is why it has attracted a lot of interest and sales.

So, this article is going to explore whether this blender is up to the hype. I'm going to kick things off with the basics, discussing the Vitamix brand, before going into its various features.

Then I'm going to tell you all about my personal experiences using the machine, and summarize what's being said about it elsewhere on the net.

Finally, I'm going to discuss its value for money and where you can buy it, before rounding off with my final conclusion.

By this point, you will be in a position to decide whether the Vitamix E320 Explorian is the right blender for you. Please feel free to scroll ahead to any section that jumps out at you. Here goes!

About The Vitamix Brand

The company who developed the Vitamix brand of blenders has actually been around for just over a century!

The Vitamix brand is all about good whole food nutrition and that hasn't changed in all this time.

They cover both home-blending machines and commercial ones, and in 1949 they made history by making the world's first ever infomercial. And they continue to innovate year-on-year with the latest technologies of their time. 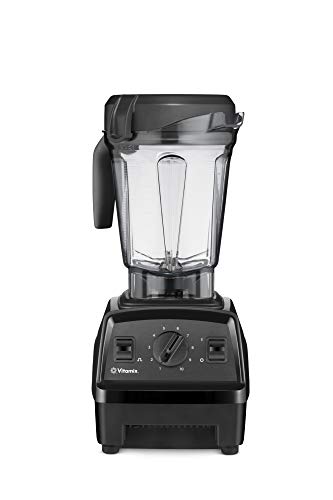 About The Vitamix Brand

The company who developed the Vitamix brand of blenders has actually been around for just over a century!

The Vitamix brand is all about good whole food nutrition and that hasn't changed in all this time.

They cover both home-blending machines and commercial ones, and in 1949 they made history by making the world's first ever infomercial.

And they continue to innovate year-on-year with the latest technologies of their time.

Now I'll cover each of the blender's features in turn.

The E320 has a large 64 ounce capacity, which is large enough to make enough servings for small families in just one batch.

But despite its relatively large size, it's still small enough to fit on top of the counter and under your cupboards.

It looks quite sleek and unassuming, and it's available in two color options. Both have a clear container for your food and drinks, and the color choice of black or red covers the base and the lid.

The machine operates at 2.2 horsepower, which is equivalent to about 1600 watts.

And the great thing about having this much power at hand is that it's even powerful enough to crush ice if that's what you wanted it to do.

Thanks to the dial on the front of the machine, you can adjust the speed of the blending to your liking.

And this means that you can achieve different textures of food and drink depending on which speed setting you choose.

And it's mostly due to the machine's variable speed control that it can be so versatile.

You can use it to grind your coffee beans in the morning, make a cool smoothie for the day ahead, make a hot vegetable soup for your supper, or use it for making salsa on the weekend.

There are 10 different speeds available to choose from for all kinds of textures – the possibilities are endless.

The E320 also has a great pulse feature, and this is great for really moving food around in the container to get all those yet to be blended bits down towards the blades.

One of the most impressive things about the E320 is just how easy it is to clean.

You just add some washing up liquid, some water, press a button, and it's self-cleaning – super convenient!

Coming from a top brand like Vitamix, you know the machine is going to be built to last.

It features top quality components, such as a BPA-free tritan container, a cool running motor, and hardened stainless steel blades.

There are several Vitamix accessories that are compatible with the E320, however, unfortunately, you usually have to pay separately for these, and they don't tend to come already included in the box.

But in my view, the most impressive thing about the machine is the warranty. The E320 comes backed with a very lengthy 7-year manufacturer's warranty.

So, this was my first time using a Vitamix blender, so I had high hopes. Up until now, I never had the budget for one, and I always went for cheaper, more affordable alternatives.

My first impression was that the machine was incredibly easy to use. I was not overwhelmed with buttons and dials, and I found it very simple and straightforward to get to grips with.

It worked great for my smoothies, providing a gorgeous velvety texture and plenty of flavor.

It was also great for my vegetable soups, blending my swede as easily as if it were ice cream.

And speaking of frozen goodies, I also tried blending some frozen fruits in it, and the blades went through like butter.

I didn't want to risk using the machine to crush ice, however, because I was afraid it would risk dulling the blades, which I know can happen, and I didn't want to damage the machine after spending so much money on it. I also loved just how quick and easy it was to clean.

I've had a really good look around, and for the most part, customer ratings and reviews for the E320 are typically overwhelmingly positive, and for every negative review, there are several more glowing  reviews.

Customers just love the machine's versatility and its power. But it seems that despite its lower price point, some customers expected it to perform just as well as Vitamix's higher end blenders, and were left a little disappointed.

First of all, I checked  Vitamix's own website. I was expecting them only to allow glowing testimonials on their site, but I was pleasantly surprised to find that they also allowed negative reviews on their site.

When this article was written, there were over 60 individual customer ratings on Vitamix's own site.

The average customer rating was almost 4 stars out of 5, with over 50% of customers giving it a full 5-star rating.

Customers were able to rate different qualities of the machine, and their ratings averaged out at 4 stars out of 5 for value, quality, ease of use, and versatility.

And what I also noticed about any negative review that came up on the site was that the company was happy to respond to these reviews, and offered plenty of help and advice to any unhappy customers.

Ratings and Reviews on Amazon

The customer ratings and reviews on Amazon are even more impressive. I am pleased to report that the average Amazon customer rating for the E320 comes in at a whopping 5 stars out of 5, even after well over a thousand individual customer ratings.

This is because nearly 90% of those who bothered to leave a rating gave it a full 5 stars. Though admittedly there were some who gave it 3 stars, or in a few cases, 1 star.

Amazon customers gave it 4 and a half stars for such qualities as blending power, sheerness, and ease of cleaning, but just 4 stars out of 5 for value for money.

I can understand why customers rated it a little lower for value for money, given all the cheaper alternatives out there.

Where To Buy The Vitamix E320 Explorian Blender

If, like most people, you like to buy from Amazon, you can do so via this link. And the great thing about buying through Amazon is that you don't have to pay for it in one go, and can pay in installments.

And Amazon often has pre-owned, refurbished ones that you can pick up for a fraction of the listing price of a brand-new machine.

Or, if you like to shop around for the best deal, it's also available to buy on the following links:

As a general rule, however, products are usually more expensive when you buy directly from the manufacturer.

The Vitamix E320 is relatively cheap for a Vitamix blender, but is still way more expensive than any of the budget blenders out there, so I guess it's kinda mid-range.

I would definitely argue that it's good value for money, though, because of just how smooth it gets those fruit and veg soups and purées.

So, this mid-range blender is a powerful little machine that would make an excellent addition to any kitchen. It comes from the top, most well-established brand of blenders in the industry.

It's also a very versatile little machine, able to create just about any concoction you could want from a blender.

Based on both my own experience, and a general consensus from the public at large, I would hands down recommend it!

Brandon White
Hi, my name is Brandon White, and I created this blog to inspire others to cook and enjoy finer cuisine, even those on a budget. Being a personal trainer, I have a passion for healthy eating, and teaching others how easy it can be. Healthy eating doesn’t need to be boring, it can be delicious and reasonably priced.

Eating good food is not only soothing for the soul, but it is far better for your body and your overall health too. Eating a better diet is obtainable, and through my blog I hope to inspire others to try out new and exciting foods.
Latest posts by Brandon White (see all)